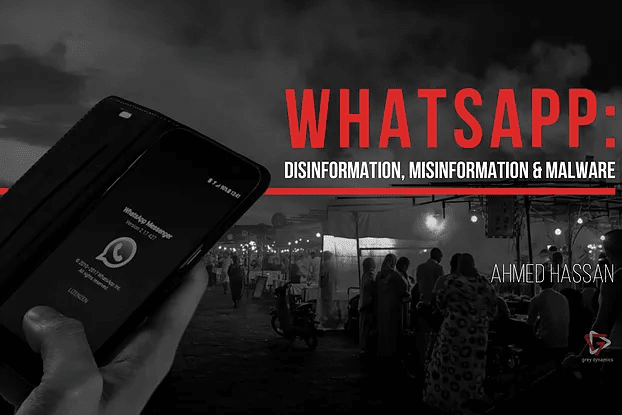 At the end of 2017, I travelled through East Africa to meet several officials to discuss how Grey Dynamics can deploy our solutions with the African Union Mission in Somalia (AMISON) among others. On the first stop of my trip I met up with an old friend—a close advisor to the President of Somalia—in Nairobi, Kenya. After some pleasantries, the conversations went into—as it often does—politics. He presented me with a meme of a notorious foreign intelligence official donating blood after the horrible terror attack on the 15th October 2017, which rocked Zoobe junction in downtown Mogadishu killing 587 people and wounding many more.  The caption of the meme read: “…donating blood while he is infected with HVI!”. Outside the absurdity of the claim in the meme, it was apparent that the picture was poorly distorted in Photoshop. When I mentioned that it was clearly doctored my friend went into the group and recorded a voice note stating that it was a fake and apologised.

This specific group had 1500 members, often also part of other groups, with thousands of participants. The question is: Did people retract the meme they spread too or was the damage already done? These groups are often filled with likeminded individuals, thus creating echo chambers. Most participants want to hear or see information that fits their world view. In this case, the damage was limited. However, there are instances where the spread of misinformation, disinformation and malicious malware had bellicose consequences.

In India, the spread of misinformation led to radicalisation and even turned lethal on several occasions. India is according to WhatsApp the largest market, with over 200 million active users. The rise of Hindu nationalism—with premier Modi’s BJP at the vanguard—combined with the speed of viral messages in WhatsApp groups, where deployed to win the elections. On the other hand, it also sparked several lynching’s by angry mobs. In 2014, Mohamed Akhlaq was beaten to death by a crowd, after a local cow advocacy group was warned via WhatsApp messages. Mr Akhlaq was accused of slaughtering a cow and keeping the meat in his house. These rumours that were spread on WhatsApp have yet to be substantiated. According to one expert frictions between religious and ethnic groups have always existed, however, WhatsApp have amplified these divides. Until now, there were only several deadly cases reported but misinformation campaigns can lead to far direr incidents.

A few days ago, Wired magazine reported on the role of WhatsApp in disinformation efforts influencing the public health crisis in Brazil. Yellow fever used to be found predominantly in the Amazon regions, and would affect a small number of people. Yet in 2016, due to deforestation, climate change or a combination of both, the disease has turned endemic. Yellow fever has reportedly spread at a rate of one mile a day, and it is putting the people living in the megacities of Rio and Sao Paulo at risk. To combat the looming endemic the government started a vaccination campaign, yet the efforts have been hampered due to the spread of disinformation and conspiracy theories in WhatsApp groups. In one instance, people shared a voice recording of a supposed expert from a reputable research institute, who claimed that the vaccine was dangerous. A few weeks later, a story surfaced stating the death of university student after he was administered the vaccine. Both stories were quickly rebutted yet the damage was already done. Since, the social media platform is encrypted, it also very difficult to research and combat the origins and range of the misinformation. Making the WhatsApp a suitable vehicle for trolls, propagandists and hackers alike.

In February, security researchers as Kaspersky Lab found malware that let hackers target WhatsApp users on Android and Windows devices. The software, named “Skygofree” was described by Kaspersy researches as “one of the most advanced mobile implants” the company has come across. The malicious software can eavesdrop calls, record audio, take pictures, take over phone calls, text messages, detect geolocation and access the memory of the phone. With such a potent piece of software a hacker can wreak havoc on individuals or groups. Nevertheless, it appears it has only targeted a small number of targets even though it has been active since 2014. In these cases, it is challenging to determine where Skygofree originated from. However, according to researchers at Kaspersky it was highly likely developed by an Italian IT company that specialises in surveillance products. Since, the malware was designed as a “cyber surveillance tool” it can be hidden in attachments, which are shared on WhatsApp.

The developers from WhatsApp are experimenting with methods to combat the spread of disinformation, misinformation and malware. According to TechCrunch, WhatsApp have been testing a spam warning feature since the beginning of the year. Although, WhatsApp refused to comment on this new feature.

The platform can connect people from around the globe and those in the developing world in particular. Just like Facebook and twitter it has revolutionized the way people consume (fake)news and therefore share the same pitfalls. However, unlike Facebook and Twitter it is a closed platform due to the encryption protocol developed by Signal. Making it an excellent tool for agent provocateurs to spread discord, mobilise masses and radicalize groups. For intelligence professionals and researches alike these groups can also form a wealth of knowledge, and with the help AI it will be possible the conduct sentiment analyses and create predictive analyses in a not so distant future.

Ahmed is the CEO of Grey Dynamics and Editor for the Grey Zone blog. He writes about Super-Empowered Individuals and groups, Infosec, Espionage and Covert Action