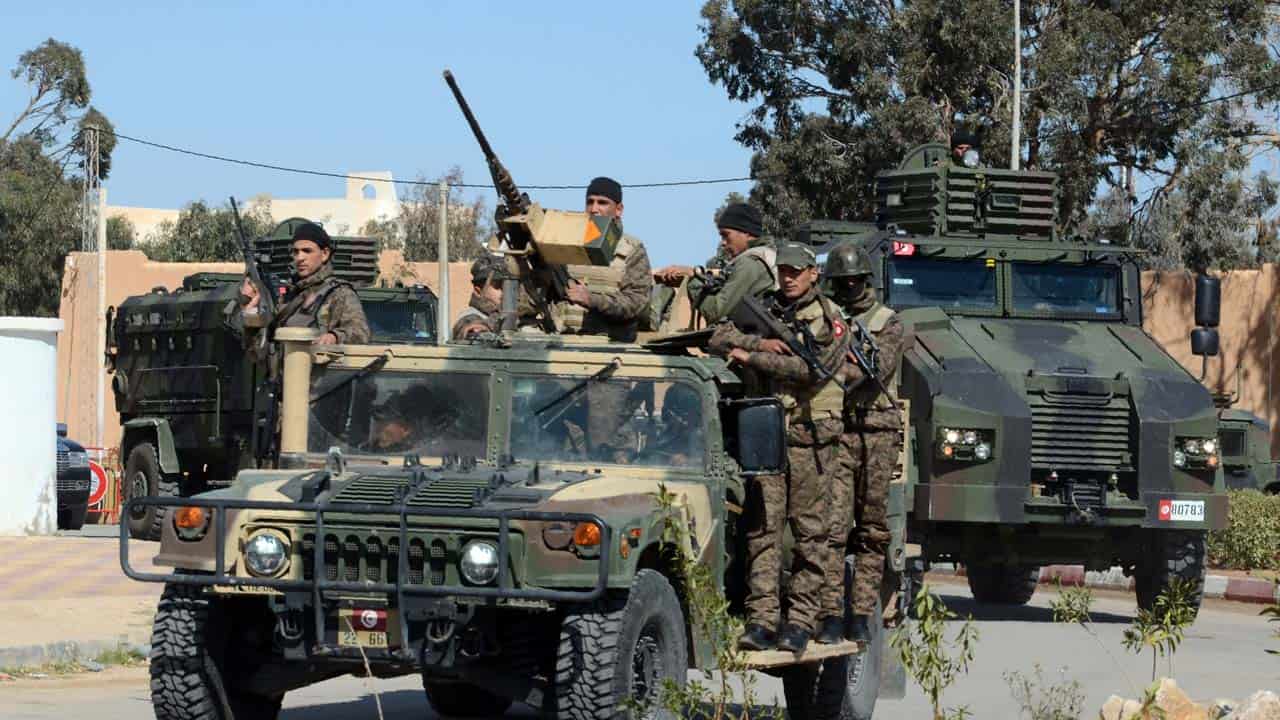 Tunisia is considered one of the success stories of the Arab Spring in that democracy was established. However, the regime is heading down a dangerous path in curtailing liberties acquired in the revolution to quell the terrorist threat. A path that potentially drives radicalization itself.

In the aftermath of the revolution, the state of emergency lasted until 2014, only to be imposed again after the beach shooting at Sousse in July 2015 and lifted in October. The next month the Presidential Guard in Tunis was attacked, and the state of emergency was re-imposed. The state of emergency has been the new normal since then, with its latest renewal 5 March 2019. Under the state of emergency, the security forces have conducted arbitrary arrests, warrantless raids while using excessive force and torture, and imposed night-time curfew. Since 18 January a new emergency bill meant to replace the current Presidential Decree has been discussed in Parliament. If the new bill is passed, the state would be authorized to seize passports, impose house arrest, conduct privacy-invasive surveillance, ban demonstrations, and suspend associations on very weak grounds, taking the new normal to beyond repressive.

Particularly men assumed to be Salafist have seen a steep increase in abusive police methods. It is this group that has suffered the most from the use of torture techniques by security forces and had imposed discriminatory travel restrictions based on appearance or religious practices. In 2018, 83 terrorists in Tunisian prisons were interviewed to identify the crux of their turn towards jihadism. It found that for 90%, the main driver was state repression. Specifically, after 2013, Salafi organizations and practices were restricted, and increasingly targeted on weak judicial grounds. In October 2018, a 30-year old woman detonated her bomb vest in the middle of Tunis.

Despite the likelihood of it being numerous drivers that propelled her towards jihadism, her last action was to participate in an anti-police brutality protest before targeting police officers for the detonation. Naturally, this reinforces the notion of a correlation between radicalization and repression in Tunisia. However, on the other side, with the repressive regime ousted in the revolution, the Salafist preachers were no longer silenced. With the newly acquired freedom of speech, they could convey their religious or even extreme interpretation to people freely and drive radicalization. In 2013, Salafist extremists destroyed cultural sites in Tunisia, particularly Sufi heritage sites, which initiated the crackdowns. It is likely that the estimated 6,000 Tunisian foreign fighters in Syria and Iraq are made up of a combination of radicals fleeing from the crackdown and individuals radicalized by the crackdowns themselves.

Paradoxically, military expenditure increased after establishing democracy, and rapidly so after the crackdowns began – as shown here in USD millions. 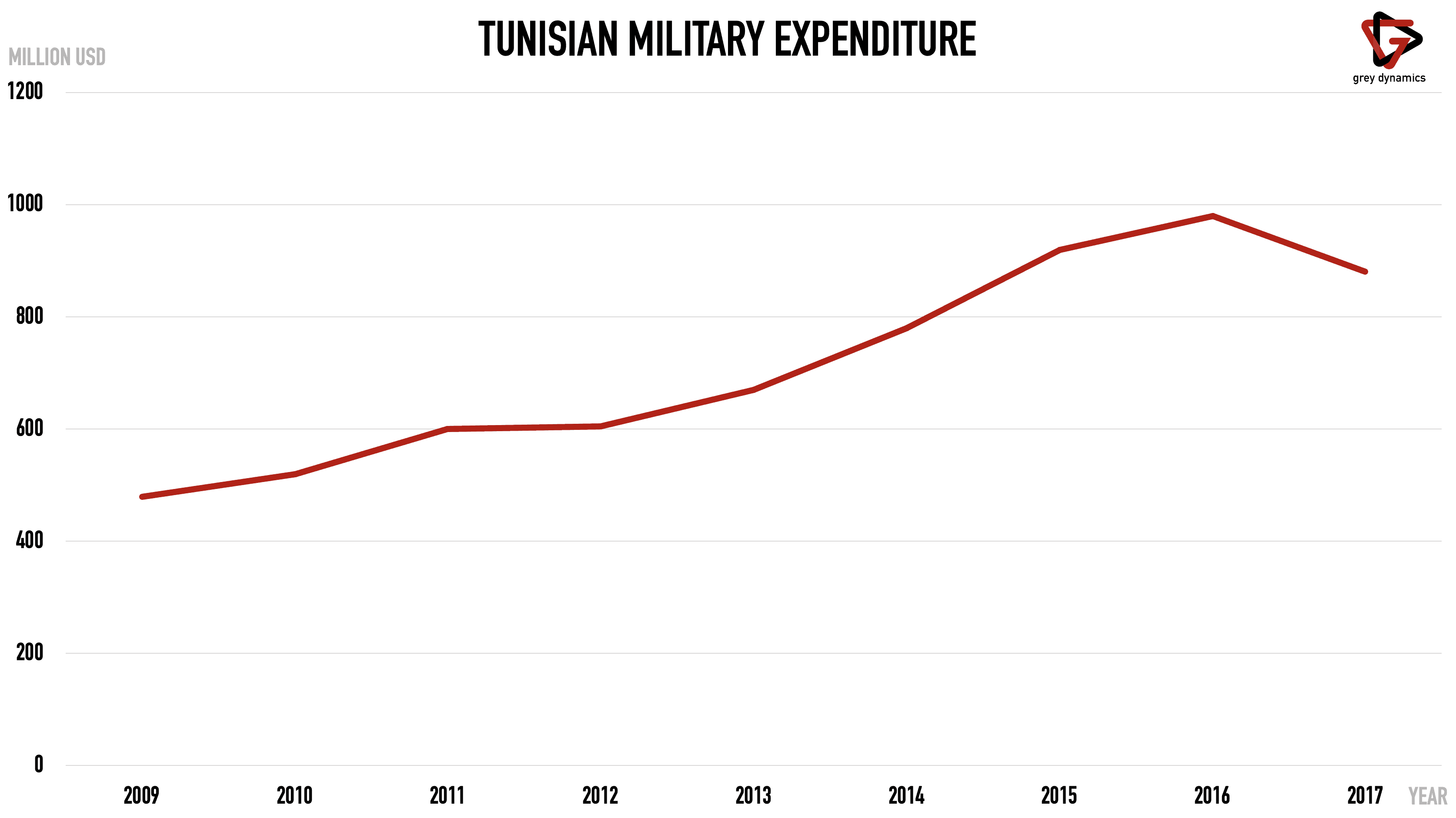 The increased budget has been spent on several security projects: In 2017, Tunisia summoned 31,000 youth for conscripted service as required by a new bill – only 506 responded. Meanwhile, on the Libyan border, a concrete wall with cameras and sensors began construction in 2016 – largely funded by the US and Germany. While US and Germany see this as a measure to prevent migrants reaching the EU, the wall will prevent the flow of arms and terrorists to Tunisia as well.

Moreover, military cooperation has boosted the Tunisian security forces drastically. US military supply to Tunisia was valued at $12 million in 2012 – in 2017 it was $119 million. The Tunisians have acquired rifles, boats, night-vision, body armour, recon aircraft, communications, and high-tech intelligence and surveillance equipment. US recon drones fly out of Bizerte Air Base while a permanent presence of 150 US Marines is tasked with training Tunisian security forces – an allegedly participated in a mission targeting terrorists in Tunisia in 2017.

On 16 March 2019, Islamic State Algeria Province (ISAP) posted pictures online of themselves in Tunisia for the first time and showing themselves preparing couscous and IEDs while posing with weapons and landscape. On 20 March 2019, Tunisian forces killed three ISAP fighters in Jabel Salloum, an area highly likely to be the one from the pictures. Pictures of the equipment they seized show at least two rifles identical to the ones from the ISAP pictures. This could very well be related. If so, it helps summarizing counter-terrorism in Tunisia – a highly equipped, trained, and capable security apparatus with few judicial restraints, which seemingly is a driver for radicalization.