The Geopolitical Ramifications of Damming the Nile : The Grand Ethiopian Renaissance Dam

The latest round of talks between Ethiopia, Sudan and Egypt has failed to reach a consensus on the issue of reports on the Grand Ethiopian Renaissance Dam (GERD). These technical reports are necessary to completing the agreement between the three states on the GERD. However, there is a realistic possibility that Ethiopia will commence filling of the reservoir for the dam before the technical reports are finalized by French consulting firms.

Following the latest meetings on November 12th, Egyptian officials have expressed concerns about the unilateral Ethiopian decision to fill the GERD reservoir before the reports have been completed, and a final agreement has been reached. Should this filling proceed, it would put severe strain on relations between Egypt and Ethiopia. 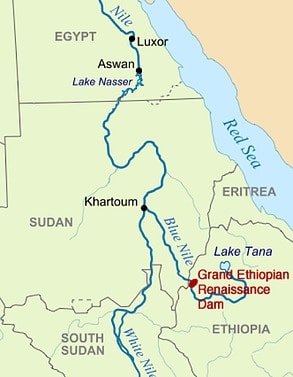 Figure 1 – A map of the Nile and tributaries (Source: Yale Environment 360)

The dam is currently two-thirds completed, and it is set to be the largest in Africa, which has raised concerns on its impact downstream, particularly in Egypt. The Nile provides Egypt with nine tenths of its water supply, and more than half of the water in the Nile stems from the Blue Nile on which the GERD would be placed.

Thus Cairo is concerned that the Dam presents a threat to continued supply of water, as per the 1959 ‘Nile Waters Agreement’. The 1959 agreement awarded a majority of the water flow to Egypt, and the rest to Sudan, as well as bestowing veto powers over upstream dam-building to Egypt.

This agreement was replaced in 2015 by a preliminary deal, four years after GERD construction began. The 2015 ‘Declaration of Principles’ was signed by Egypt, Sudan and Ethiopia, and it consists of ten principles. According to Hani Raslan of the Al-Ahram Center for Political and Strategic Studies, the declaration itself only requires its signatories to respect the principles. As such, there is no legally binding framework, which Ethiopia needs to adhere to.

The Declaration of Principles also ties the filling process to the technical reports, whose issuance is prevented by the politico-diplomatic deadlock. In order to circumvent this, Ethiopia separates the filling process into two stages: a ‘first filling’ aimed at filling the reservoir enough to drive two turbines, and a ‘complete filling’ which would see the reservoir filled to its capacity of 74 billion cubic metres of water.[1] Thus, by only linking the ‘complete filling’ to the technical reports, Ethiopia can make a case for pushing forward with filling the reservoir.

The GERD would upset the current balance of power in the region. The 2015 declaration prevented the breakout of war after the first third of construction of the dam was completed. Egypt has previously threatened to go to war over the construction of dams, until the Arab Spring of 2011. While Egypt was dealing with its domestic situation, Ethiopia commenced building the dam which has the potential to upset the economic relationships in the area.

It is estimated that when the dam is running at full output, it will provide 6,000 megawatts of power – sufficient to allow Ethiopia to export energy on a planned east African power grid. On a shorter time scale, the decision to fill the reservoir presents a danger to Egypt, since filling the reservoir would divert water destined for use in Egypt. This is problematic, because the Egyptian water consumption per capita is already one of the lowest in the world.[2]

The issue of the GERD is more acute for Egypt than for Sudan. Currently Sudan only takes two thirds of what it is allotted in the 1959 agreement. The dam would allow Sudan to draw water for irrigation around the year, rather than in a pattern determined by the episodic flow of the Blue Nile. This would increase the amount of water drawn by Sudan, and by extension reduce the amount of water that reaches Egypt.

To further compound the issue Sudan was divided in 2011 into Sudan and South Sudan. The treaty that divided Sudan made no mention of the water rights to the Nile, which Egypt has seized as an opportunity. By supporting the South Sudanese development of water resources, Egypt propels South Sudan to secure rights to its portion of the Nile – which Egypt in turn can buy from South Sudan.

With Egyptian allegations that Ethiopia is using the talks as a cover to delay the technical reports until construction is finalised, the political situation is poised for conflict. The signing of the Declaration of Principles confirms Cairo has committed to a diplomatic solution, especially since the rise of Sisi. However, the continued delay of talks and concerns that Ethiopia could begin a ‘first filling’ unilaterally puts pressure on Egypt. Should Ethiopia succeed in finalising the dam and commence filling of the reservoir, it would signal the end of Egypt’s hegemony in the Nile Basin and put relations between Egypt and Ethiopia on a hair trigger.

[1] For a frame of reference, the Egyptian annual share of the Nile’s water amounts to 55 billion cubic metres.

[2] The listed rate is 660 cubic square metres per capita, which is approximately half of the global annual average.

Junior Intelligence Analyst focusing on international political and diplomatic matters. Graduate from Brunel University London, with degrees in History, and Intelligence and Security.