Rhinos and Real Time Analysis : A Perspective on Counter-Poaching Efforts in South Africa

The illegal hunting of animals on private land is nothing new. In fact, it is one of the oldest recorded crimes. However, what was once an effort to preserve one’s own flock has taken on a much more altruistic and compassionate character. The illicit trade in exotic animal goods such as elephant and rhino tusks, rare pelts, and even the body parts of certain sea life such as shark fins, has not failed to find a market in the twenty first century. This poachers market has resulted in some interesting developments in the efforts to oppose it, which is what this article will aim to examine; specifically, the South African efforts both state sponsored and private.

The first point to note is that South Africa is no stranger to counter-poaching. It has had both private and government efforts for many decades. However, this experience is tempered by the colonial and postcolonial legacy. Much of the literature surrounding these efforts highlights the race of the teams, an ongoing issue in the country. This indicates that there may be other old habits and biases in practice lurking in the ongoing efforts.

The focus of counter poaching in South Africa (particularly with private endeavours) appears to be primarily on simply killing the poachers. This means that the main focus is being levelled at the very front of the problem, and less at the market that is driving it, and the groups facilitating it. In other words, the underlying cause for the poaching is not addressed. There are those in the private sector who believe that the poaching cannot be stopped at all. Rather they believe it can only brought down to acceptable levels. This is partly due to South Africa’s ongoing struggle with crime and insecurity. Crime puts excess strain on the police force and draws the focus of the private security industry. However, the South African government made improvements in increasing the professionalism of the counter poaching industry. This was accomplished by introducing regulations and requirements in training, such as armed guards with sufficient basic instruction in the principals of counter poaching. Additionally, it has taken the bold step of refocusing the majority of the South African Ranger Corps on the counter-poaching mission. However, this still falls into the cognitive trap of believing it to be a military issue solvable with force. 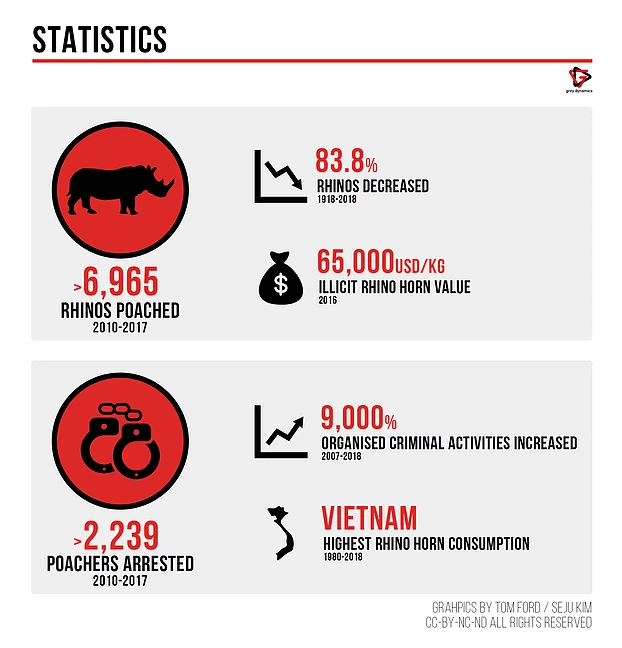 Furthermore, the revelation of Grace Mugabe’s leading role in a major Zimbabwean poaching syndicate emphasises the broader, transnational difficulties that South African counter-poaching faces. The presence of interests in the immediate vicinity willing to deliberately oppose efforts to halt or disrupt the organised poaching trade is one of the biggest problems faced by South Africa. However, this highlights the need for greater international cooperation from countries both internal and external to the region, to counter such large obstacles. This cooperation must also take into consideration the complex situation regarding actors such as Zimbabwean leaders. However, because this was not a governmental effort but the private effort of a high profile individual it may allow certain diplomatic freedoms in the wider efforts to counter similar operations.

Similarly, the increase in the presence of organised crime groups to the issue since 2007 has only increased the complexity and scale of the issue. A 9,000% increase in activity to be precise. This means, however, that by working as organised crime syndicates, the poaching groups fall into recognised categories and models and the means to combat them can be drawn from other areas. These areas specifically would be intelligence analysis, and detection.

Rather than applying military principles of guarding set areas or individuals, and aiming to destroy an enemy, the processes more often associated with intelligence such as structured analysis and detection can be applied to counter an organised crime syndicate or network. As Stanley McChrystal emphasised whilst commanding US Special forces against Al-Qaeda in Iraq in the early 2000’s “it takes a network to defeat a network”. So, he sought to bring in every available resource and discipline he could from all departments to improve the task force’s capabilities. The same principle can be applied to South African counter-poaching, and indeed it is in its infant stages.

The Ezemvelo KZN Wildlife conservation agency is responsible for one of the hardest hit parks in the country. It has begun using technological tools and networking with local agencies and services. This endeavour uses a nerve centre structure, with the hub based at Ezemvelo’s new facility in Hluhluwe-iMfolozi (HiP) Park. This centre allows for data to be aggregated in a single location for planning and execution of counter poaching. This is done in real-time from an array of inputs across the park that are both static/passive, but also mobile or man-portable. This has created what they have named the Smart Park system, drawing on all of the available sources to create the big picture of the park and its environment.

Using Microsoft Azure the agency applies automated data analysis to process data and predict trends. However, this may not be enough. This is partly because of the inherent (albeit workable) flaws of automated data analysis, but also because the problem is bigger than HiP and is not local to South Africa. The types of systems in HiP and the network of counter-poaching efforts need to expand across borders and cooperate with neighbouring groups. This, however, also requires similar levels of commitment to counter-poaching from the prospective partners, as well the effort to be carried out in earnest. The United States Department of State has provided a grant of financial support to the Ezemvelo effort, however moral and financial support may not be sufficient, nor the most effective type of assistance.

The explicit commitment of state and non-state international partners would have the double benefit of disrupting poaching and disrupting organised transnational crime in the region. Additionally, network analysis from more forensic and intelligence led approaches could allow for the customers of this market to be found and appropriately dealt with wherever they may be. The emerging consumer appears primarily to be South East Asia, which means a broad approach is needed.

The need for a new method, or a greater integration of what Ezemvelo has begun, is exemplified by the steady state of losses amongst endangered species. These losses can be illustrated using rhinoceroses as a specific metric. The number of wild rhinos has dropped from roughly half a million to around 30,000 in the last hundred years.  The added benefit of tackling organised crime incentivize states to be more forthcoming with their assistance. It would also allow them to leverage existing capabilities in fighting these particular opponents. Additionally, they can take the lessons already learned and make use of them in other fields. The application of technology is also crucial. This can be done by exploiting emerging Artificial Intelligence technologies that are becoming available, but as using it as a powerful supporting tool for the human element.

Tom is a graduate of King’s College London and Brunel University, in War Studies and Intelligence and Security Studies respectively. His focuses are on strategic and network analysis particularly in counterterrorism. He is also an armoured cavalry trooper in the British Army Reserve.